On Tuesday the House of Representatives will vote on the Cut, Cap, Balance Act. This bill would immediately cut the deficit, cap future spending and institute a balanced budget amendment, which are critical reforms necessary to change the way Washington works.

Please, I urge you to contact your Representative and ask him to co-sponsor and vote YES on the Cut, Cap, and Balance Act of 2011. Take Action>>

Standard & Poor's has said it will downgrade US debt if the US doesn't 1) cut spending substantially and 2) REFORM the way it budgets, to control future spending.

The Cut Cap and Balance Act (CCB) would meet the tests set forth by Moody's and S&P, so we never again face this kind of debt problem. In short, "CCB=AAA."

Thank you for signing the Cut, Cap, Balance pledge.

We know that you share our desire to Save America from fiscal ruin.

This week the House began a 10 day recess, as the arbitrary debt limit “deadline” looms on August 2.

This morning, one of our coalition members, Let Freedom Ring, released a web video about the debt limit, “Red Ink” which you can view here. 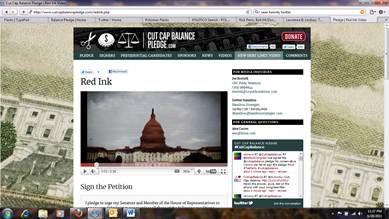 After less than a week, this effort now has the support of over 55,000 citizens, five presidential candidates, 12 U.S. Senators, 22 Congressmen and 27 candidates for federal office.  But we need more!

Our coalition recently released national poll data from last week that demonstrates that the Cut, Cap, Balance plan’s three parts have majority support from Democrats, Independents and Republicans, and that the American public opposes raising the debt ceiling 60-31%.

If you believe that our great country is headed for financial disaster if our unsustainable spending and borrowing are not brought under control, then for the next month we have a golden opportunity to act.

We ask you to do three things immediately:

2) Call your Senators and Member of Congress TODAY and ask them to sign. If they are flooded with calls, they will respond. As Sen. Jim DeMint (R-SC) says, “If they feel the heat, they will see the light.” You can reach any Senator or Member of Congress by calling the Capitol switchboard at 202-224-3121. To find your Representaive, click here and enter your zip code at the top right of the screen. Let’s burn up the phone lines!

3) With the House in recess for two weeks beginning today, please call the local office of your member of Congress and ask if they have signed the pledge (not just support it). Passing the Cut, Cap, Balance plan will take 290 votes and today we have only 22 pledge signers after six days. We need to rapidly increase our numbers and that will only occur through public pressure. We can absolutely get there if every Representative and Senator hears their constituents demanding the same thing: a permanent solution, not just another typical Washington deal. 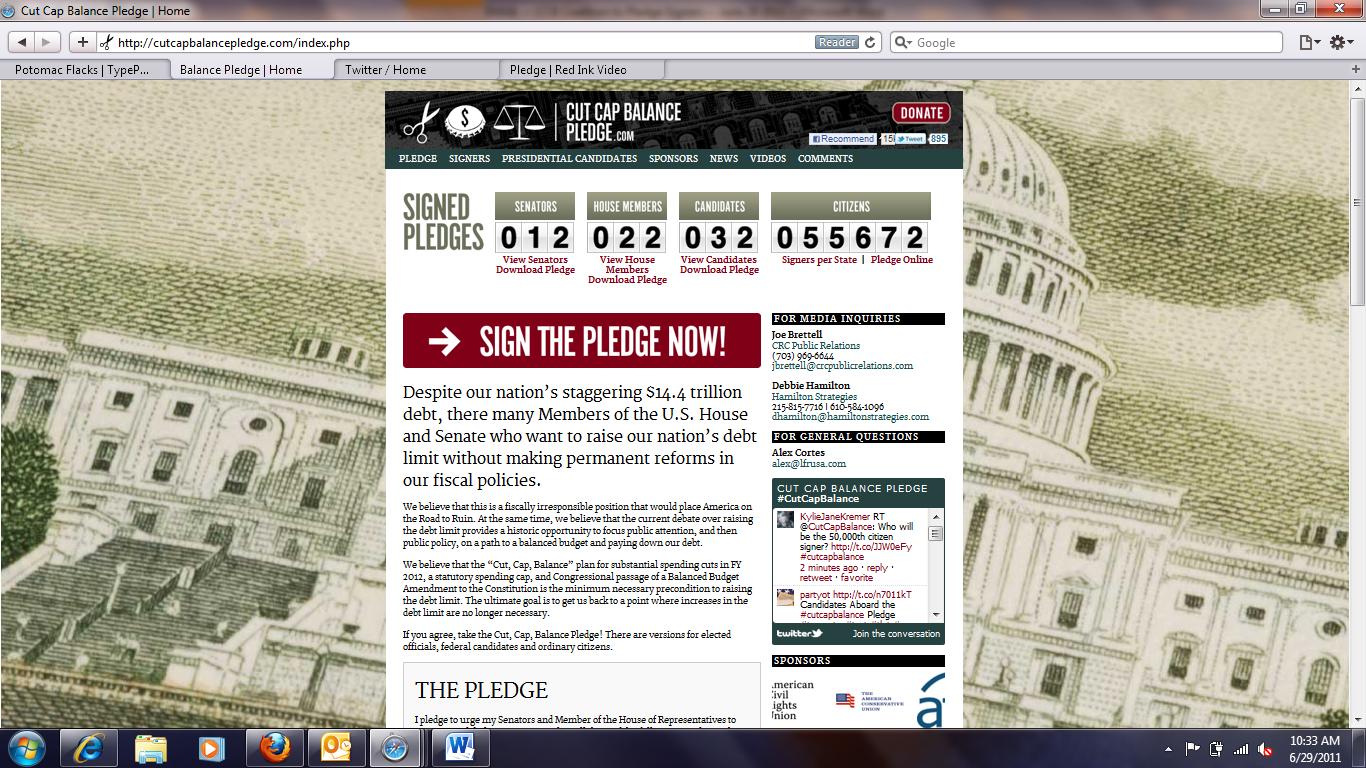 As Ronald Reagan said, “Freedom is never more than one generation away from extinction.”

Is it pointless to start a “Discussion,” if no one is interested in participating?

Our best ideas, for taking back America, come from the TEA Party “Movement.”

So where is the T.P.P. “Discussion” or should I just post these things on a Blog?

The Senate will vote TODAY at 10:00 AM Eastern on the "Cut-Cap-Balance" legislation that we have been working so hard to advance. Republicans in the House passed it earlier this week with bipartisan support. Now it's the Senate's turn.

Please call the Democrat senators listed below right now to urge them to vote for this important legislation. This is extremely important and I hope you will make at least one phone call right now.

Please consider providing the e-mail addresses, as well as the names of the Chief's of Staff for the Democratic Senators you want everyone to contact. You may remember my post on:

“Another Way to COMMUNICATE with Congress!”

We need to do more than attempt to call these Senators (IMO). We need to shut down all their communications systems, phones, e-mail in boxes and fax machines, until they get it the message

(THAT WE ARE NOT GIVING UP OR GOING AWAY)!!!

One Tactic used by Congress (Especially Liberal Democrats) is to have callers receive a voice message that says their voice mail-box is full or directing you to a message box or staffer (by name)* This is very useful in dealing with TEA Party pressure and their efforts to shut down the phone systems.

Michael, read my blog about surrender. About the sixth blog down.

As a rule, I do not use Face-Book, My-Space, or other Information gathering organizations to communicate.

I use them to gather information, not provide it. The WDC site and my Face-Book page are my only “Picture” windows on the Internet! If you do an Internet search or go to YouTube, you will see why!


Michael, read my blog about surrender. About the sixth blog down.